We are currently in a wave of SARS-CoV-2 infections dominated by the recently discovered omicron variant. What new threats does it pose? It is clearly able to overcome immune barriers to infection. Also, this variant is far more transmissible than others, making it an hyper transmissible variant. However, there may be a silver lining in the current dark cloud. Early studies from South Africa have suggested that this variant might cause more mild illnesses, and the recent information from several European countries, including the UK, seem to confirm this point. Since this variant has now become the major variant of concern, many scientists have evaluated transmissibility, host immune evasion, and pathogenicity of this variant based on data from clinical and animal studies. Certainly, this variant has shown increased transmissibility even compared to the Delta variant. Anecdotally, a report from Hong Kong documented airborne transmission of omicron from one vaccinated individual to another[1] who were housed in separate rooms of a quarantine hotel. The rooms were on the same floor but across a corridor from each other, and both individuals remained in their rooms and only opened their doors to collect food left outside. This shows a remarkable transmissibility. Is there other evidence for increased intrinsic transmissibility? Omicron replicates more rapidly than delta in primary human nasal epithelial cells (hNEC) in vitro, but by 48 hours post infection there is no difference[2]. However, when equal infectious units of virus were added to hNECs, omicron became dominant with the disappearance of delta within 24 hrs. Omicron was reported to replicate 70-forld more efficiently in ex vivo bronchial tissue than was delta.

Its ability to evade immune responses seems a significant factor favoring increased reinfection in vaccinated and naturally infected people. This has been amply demonstrated in reduced protection from infection resulting from reduced activities of neutralizing antibodies against the omicron variant. There indeed seems to be a higher rate of reinfection with omicron than delta or beta[3]. Breakthrough infection of vaccines is also quite high; protection against infection with omicron has been estimated to be between 0% and 20% after two doses, and between 55% and 80% after a booster dose.

Evidence of resistance to neutralizing antibodies has been confirmed. Hoffman et al. [4] showed complete resistance against commonly used monoclonal antibodies (mAbs). Only sotrovimab remained largely effective, and casirivimab retained marginal activity. Post-convalescent sera neutralized omicron 44-fold more poorly than against delta. Sera collected 1-3 months post-vaccination neutralized omicron 12-fold more poorly. Vaccine boosters improved this ratio to 3-fold, possibly indicating a broadening of vaccinee antibody repertoire. Substantially similar results were reported in vaccinees boosted with either the Pfizer or the Oxford vaccines[5, 6]. Sera from people with “hybrid immunity” (infection followed by vaccination or the reverse) show improved neutralization titers, although neutralization was still compromised relative to other variants[6, 7]. In addition to escape from neutralizing antibodies, Willet et al.[8] presented evidence that omicron has switched its preference for cell entry pathways from using surface fusion mediated by TMPRSS2 cleavage of the spike protein to endosomal fusion mediated by cathepsin and independent of TMPRSS2[2, 8]. Taken as a whole, increased transmission of omicron is likely a combination of increased intrinsic transmissibility and immune evasion, with the latter likely the greater factor, and a shift in infection pathways remaining a possible contributor.

Omicron is clearly able to overcome immune barriers to infection. Also, this variant is far more transmissible than others, making it an hyper transmissible variant.

Its ability to evade immune responses seems a significant factor favoring increased reinfection in vaccinated and naturally infected people. This has been amply demonstrated in reduced protection from infection resulting from reduced activities of neutralizing antibodies against the omicron variant

In spite of its enhanced contagiousness, omicron appears to have reduced pathogenicity in infected people[9] and this phenomenon has recapitulated in animal models.

In spite of its enhanced contagiousness, omicron appears to have reduced pathogenicity in infected people[9] and this phenomenon has recapitulated in animal models. This conclusion seems to be holding up with time, as reports from Scotland and England are in general agreement. In vivo studies have shown that the omicron variant caused attenuated infection and disease in mice and hamsters (13). Specifically, the variant caused limited weight loss and lower viral burden in the upper and lower respiratory tracts in 129, C57BL/6, and BALB/c mice as compared with previous SARS-CoV-2 variants. Although K18-hACE2 transgenic mice sustained infection in the lungs, these animals did not lose weight. In wild-type and hACE2 transgenic hamsters, lung infection, clinical disease, and pathology with B.1.1.529 also were milder compared to historical isolates or other SARS-CoV-2 variants of concern. Moreover, infection of Syrian golden hamsters with omicron did not result in weight loss, even at high infectious doses, in contrast to infection with prior variants. Overall, this study demonstrates attenuated lung disease in rodents, which parallels preliminary human clinical data. Consistent with these findings, replication of omicron is greater in the human upper respiratory tract than in the lower tract. 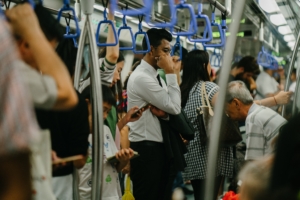 Humoral immunity, mostly neutralizing antibodies, have been identified as major correlates of protection from COVID-19. However, Fc-related functions of antibodies and T cell and innate immune interactions with respect to omicron have not been well studied. Notably, although omicron has mutations that reduce the efficacy of neutralizing antibodies, the mutations in CD8+ T cell epitopes are far fewer (only 1 of 52 CD8 epitopes mutated[10]), and one wonders whether omicron might have evolved in a patient with impaired T cell immunity. Vaccines have been shown to induce T cell activities against the virus. Keeton et al.[11] found that 70-80% of the CD4+ and CD8+ T cell responses to the spike protein were maintained against omicron, and that those responses were of comparable magnitudes among the variants. Among patients hospitalized with omicron, T cell responses were comparable to those in patients hospitalized in previous waves. All the above suggests that T cell immunity provided some levels of protection to these patients.

Innate immunity is another important activity against SARS-CoV2. Several viral proteins inhibit innate immune activity mediated through interferon, and one of these is non-structural protein 6 (NSP6), which inhibits interferon regulatory factor 3 (IRF3) phosphorylation[12], compromising interferon responses. Omicron has a 3 amino acid deletion in nsp6, which may alter its function and its ability to induce disease. It should be noted that this deletion is also present in the alpha, beta and gamma variants. There are other mutations in omicron NSPs that are unique, however, and may also affect their functions. Their effects on altering viral pathogenicity need to be further confirmed

These results from In vitro and in vivo studies suggested attenuated pathogenicity of the omicron variant. However, sharp surges of COVID-19 cases mostly due to the hyper transmission of the omicron variant are causing increased hospitalization and are overwhelming health care system. Due to its high transmissibility, even a quick, transient encounter with infected people can lead to an infection, thus requiring additional efforts for preventive measures of this variant by a boost (a third dose) vaccination, wearing high-grade masks, and avoiding large gatherings.

Deltacron: a new variant or a laboratory contamination?   Global Virus Network (GVN) Adds the Institute of Biomedical Systems and Biotechnologies...
Scroll to top